Best known for its mascot the Ram, Aries is the very first sign of the Zodiac, born between March 21 and April 19. The planet Mars rules this fire sign that is often described as brave, bold, and individualistic.

Continue to read on to learn more about the defining traits of people born under the sign Aries, their personality, and how they fare in terms of love, career, and money. 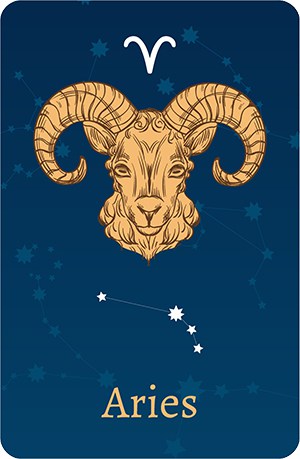 Aries is often dubbed as the baby of the Zodiac, which implies their young soul with a child’s innocence and an attitude of putting themselves first in everything they do.

Aries people are sure of themselves without coming off as arrogant. This self-assurance helps them as they go about with their daily routines.

Bravery is something that Aries carries in every aspect of their lives. They don’t easily waver even when facing new challenges and fears.

The determination of Aries means they always try to do better and be better. They don’t give up right away, and they tend to correct any bad behavior such as occasional personal vices.

Aries people are always honest. They don’t view the world with rose-colored lenses and are not afraid to share their honest opinions.

Aries tend to be optimistic and happy even amidst tough situations. Thanks to their confidence, they never stay unhappy for a long time.

Aries feels with such intensity and passion. Whether it is a relationship, career, or a new hobby, Aries is always enthusiastic about things important to them.

The aggressiveness of Aries is not a surprise considering that the planet named after none other than the Roman god of war Mars rules the sign. The honest nature of Aries can be paired in unfortunate ways with this tendency to be aggressive.

Aries tends to be excessively competitive, feeling the need to always be the first in all things they do both at work and in social situations. This competitive nature makes Aries a bit standoffish and annoying with others seeing them as egotistical and arrogant.

Aries tend to spend and eat on impulse. They are often rash when it comes to shopping or saying things that they end up regretting later on.

What seems like small things can easily anger Aries. It only takes them seconds to become fuming mad from being collected, cool, and calm.

Aries always loves to be the first in everything. Ambitious and bold, they dive headfirst no matter how challenging the situation is.

Aries are confident, motivated, and passionate leaders who form a community with their relentless determination and cheerful disposition. Direct and uncomplicated with the way they approach things and people, unwanted nuances and excessive details often frustrate them. Aries wants things easy and quick.

These rams lead with an unseeing optimism as they push through life with such enthusiasm that pairs well with their unique impulsive nature. Aries people also tend to think only after they act, often making them learn lessons the hard way.

Aries is the representation of a singular spirit, following the philosophy that everyone should look after themselves. While it can be inspiring to have this kind of self-determination, Aries should be careful with their tendency to be selfish.

The courageous rams are armed all the time and always ready for battle. They are also known for their explosive temper and while these outbursts are short, you might want to avoid an Aries until they cool down.

However, when not furious, Aries are playful, positive, and upbeat creatures who love to live their lives to the fullest. These people excel in the fields of sport. They love to organize party games and speed down the roads.

As far as love and romance are concerned, Aries must take initiative. Once they fall in love, Aries express their feelings to the other person without giving it much thought. Aries has rather complex compatibility with other zodiac signs.

When in love, Aries showers affection over their loved one, sometimes too much to the point that they don’t check what they receive in return. This sign is very energetic and passionate when in love and tend to be addicted to sexual encounters and the pleasures of the flesh.

Career is probably the specific area of life where Aries people shine in their brightest. Their workplace perfectly lets them show and express their creativity and ambition as they fight to be as good as possible.

Aries are natural-born leaders who prefer to issue orders instead of receiving them. Their large doses of energy and their speedy minds help them always be a step ahead of everyone else. For them to become successful, they should follow the career path of their choice and avoid giving up on their professional plans because of their emotions.

If faced with challenges, Aries quickly analyzes the situation and solves it right away. They are unbothered by competition and instead, they use it as motivation to shine brighter.

Those born under the Aries sign tend to have great careers in challenging environments and sports and also enjoy their chosen professional path as soldiers, policemen, managers, and the like.

While Aries is wise and saves some money for rainy days, it is not usually the case when it comes to the joy of spending money. They also tend to take risks.

Aries loves living in the moment and is not that focused on the future, which can make them hasty and irrational in terms of financial decisions. Good thing that they still find ways to earn money and make up for their expenses. They do it through a natural energy flow that must come back as long as it is invested cleverly.

Being the first sign of the zodiac, Aries is the fierce individualist who always wants to be number one in everything. These fiery rams are bold and independent that can work to their advantage. However, their tendency to be impulsive and aggressive might also lead to not so good decisions like dumping their love partners.