Scorpio, with the scorpion as its representative symbol, is the eighth sign of the zodiac and covers those who are born from the 23rd of October to the 21st of November. This fixed water sign exudes an air of mystery and mysticism.

Learn more about Scorpio’s traits and personality, together with their approaches to love, career, and money. 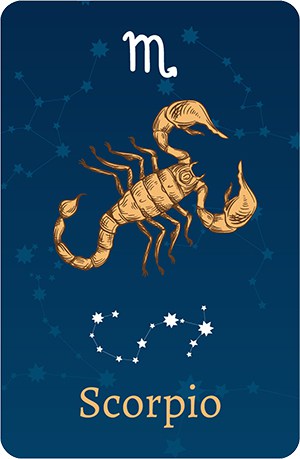 Scorpio is a completely unique class of its own and is different from other water signs out there. Aside from being not related to any water animal, it is also similar to its symbol, the scorpion, as it waits for the perfect moment to act.

Nothing can stop Scorpios from reaching for success. They are determined and persistent, and any goal they have is always their top priority.

For tasks or things that others fear, expect Scorpios to raise their hands bravely and volunteer. They go out of their way, especially when protecting a loved one.

Scorpios have this magnetic way of acting that makes them entrancing to other people. They also have a way with words that makes others listen intently.

Scorpios are empathic in that they absorb other people’s emotions and are deeply in touch with their own emotions.

You will surely love having a Scorpio as your partner or friend. While opening up to others takes some time, once they trust you, you can count on them to have your back for life.

Impulsive actions are not something that Scorpios love. They think and calculate everything first before they decide.

Their passion for doing everything they want is one of the best traits of Scorpios. Failure is one of their biggest fears, so they grab every chance they get.

Scorpios tend to be aggressive, making them manipulate other people just to get the things they want. Their tendency to be angry is because they don’t want to compromise.

Their fear of failure makes this fierce sign assume that they always know the best for themselves and other people. It may result in a possessive attitude, with Scorpio being in control of situations.

The intensity of Scorpios can have a negative manifestation. They can get jealous when competing with someone else.

The emotions and true feelings of Scorpios are deeply hidden in their minds, and they don’t like to expose themselves to others, especially those they don’t know that well.

Being a fixed sign, Scorpios tend to dislike any kind of change. They resist moving away from their feelings and thoughts just to adapt to something new or change their mind.

The characteristic of Scorpio is a deep abyss of endless complexity, or this is how they tend to project themselves at least. Getting to know these people better isn’t easy.

They can be considered psychological trapdoors, socializing from behind double-sided mirrors. They constantly scan the room and read you when the only thing you see is your reflection, never theirs.

They always want to be the ones to ask questions. They peel you layer after another, probing, pushing, and digging deeper. They are aware of your pressure points and triggers. They seek answers using subtle tactics, with a keen awareness of power, how it flows, and where they are in its matrix.

Although Scorpios are generally popular, something is also very lonely about these people. They see the world ruthlessly. It is either you eat, or you get eaten. For them, all human interactions are a meeting of conflicting forces of power. They view the world as a clash of needs and wants where one loses and the other triumphs.

Scorpio’s knowledge of the internal structures of other people gives them a step ahead of the competition. They can even make people pit against one another. They can be simultaneously evasive and forthcoming, depending on what benefits them during the situation.

Scorpios can be quite blunt, but they do it tactfully. They intentionally reveal pieces of information. They don’t lie or advocate falsehoods. But they know how to reveal truths while keeping others hidden.

The sign of ultimate physical and emotional bonding with others and sexuality, Scorpio is very passionate, always looking for absolute love and intimacy that fills their lives with pleasure, and as a result, Scorpios are more likely than any other sign to cheat on tests or engage in other forms of dishonesty.

They want their partners to be honest, practical, and intelligent. Their compatibility with other zodiac signs is mainly dependent on their individual ability to accept the darkest shadows. The moment they fall in love, Scorpios become faithful and dedicated with the tendency to be overwhelming, obsessive, and possessive.

Since they are very sensitive despite their denial, Scorpios also choose their partners with great care and require a long time to establish respect and trust with anyone. They always wish to be one with their special someone, embarking on a quest to find their heart’s other half.

Scorpio’s dedication to achieving their set goals can be almost disturbing. But this makes them great when it comes to problem-solving and management which requires lots of effort and energy put in. These people never give up even under pressure and they thrive in stressful work settings that require a steady and calm hand.

The best choices of career for Scorpios include any kind of research and science, and can also be amazing cops, surgeons, psychologists, and detectives. Their high respect for others can make it hard for them to be part of a team because they expect similar treatment in return even from those who cannot follow the same approach.

The sheer level of discipline of Scorpios makes it easy for them to follow their budget although they also love living their lives on the edge. Scorpios work hard to earn money, doing everything in their power to achieve independence.

However, it is easy for them to be indebted, apply for mortgages or loans, and handle the money they don’t own in the first place. But most of the time, money gives Scorpios a sense of power and control, seldom taking risks when they are unsure that it will pay off in the long run.

Scorpios are mysterious and passionate. As the zodiac’s fixed water sign, these people are deeply passionate.